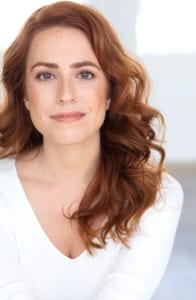 While Lindsay has been acting and performing in Los Angeles for the last 10 years, her first love is music.  She began playing piano at the age of 7 and found a passion for the language of music early on.  She continued playing piano, singing solo as well as in choirs (including a nationally-ranked Madrigal group), and performing in countless productions, concerts, and revues.  She has studied many styles, from classical and opera to jazz, pop, and musical theater, and has been able to use these tools in her teaching.  Through her love for music and performing, she found herself in a position to pursue acting in Los Angeles and has never looked back.  She is an actor, producer, singer, and writer, having been part of numerous films, commercials, and stage productions.  She is a co-owner of MiddleClass Aftermath, a female-run production company focused on telling stories in a unique way.   She recently executive produced, music directed, and performed as Emma Goldman/The Housewife in the musical, Assassins, by Stephen Sondheim and John Weidman at the Lyric Hyperion Theater, and was able to teach a cast of 18 actors to sing Sondheim, which is no easy feat.

Lindsay has been a vocal coach for over 10 years and has been teaching voice, acting, and administration at the Richard Lawson Studios for the last 3 years.  She has taught all ages, having been a substitute teacher at the Rockville Music Theater School in Maryland, teaching ages 6-18 in musical theater and voice, and has had her own voice studio in Los Angeles for the last 4 years.  Through her training for the last 9 years at the Richard Lawson Studios, Lindsay has been able to incorporate classical vocal training with aspects of storytelling and a connection to your point of view through the voice, which has resulted in more confident, well-rounded singers and performers. Lindsay works with students on an individual basis, tailoring lessons to fit the purpose and dreams of each artist, so that their training is working towards the bigger picture of their careers. She believes that finding your true voice is finding your power and everyone can be taught to sing in their own unique way because everyone has a point of view!

She currently has multiple films making their way through the film festival circuit, including her directorial debut, as well as producing and hosting a bi-coastal cabaret called LaTiDo every other month.

She holds a Bachelor of Music from The Catholic University of America in Musical Theater and is a proud member of SAG-AFTRA and AEA.