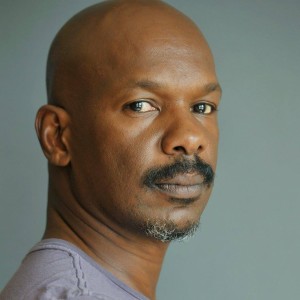 Doug Spearman was born in Washington, D.C. and raised in Maryland.  The first time he was on stage, at the age of seven for the Christmas pageant at Ridgcrest Elementary school, he knew that this was the path he was going to be on.  He went to a high school that was graced with a drama teacher named Frank Anzalone who gave him the most fantastic start.  Frank insisted that his students read plays, take art, speak a second language, be in the world.  A lot of the principles and practices that are used at the Richard Lawson Studios have been gifted to him from several teachers throughout his life from high school through university, and then pumped up by Milton Katselas and Richard Lawson.

DS:  Hah.  He helped hone them.  I still remember the first scene I did for him and the critique.  He gave me such a boost in that critique!  He’s always found the best in me and brought it out.  He gave me the best note I ever got: “Less mayonnaise on the sandwich”, which was like a key to a whole approach for me.  He makes me want to do more and be more.  Why wouldn’t I want someone like that in my life all the time?

You began as an actor at a very young age.  How did you segue into writing and directing?

DS:  When I left college, my first jobs were as a writer and then directing for TV, and my acting was what I considered my grand passion and the writing and directing was like me waiting tables.  At some point, I got tired of directing and wanted to only act.  And, after a while, acting wasn’t giving me the thing, the rush, I was looking for.  Richard encouraged me to go back to directing only do it bigger.  Try something harder, so I directed a feature film script I had.

DS:  It’s a love story called From Zero To I Love You and I actually wrote the first draft in 1998.  It’s about a man in a seemingly happy, perfect marriage who finds himself in an affair with another man.  The story is from both their points of view.  How they come together, why, and what happens when they try to separate.  I’ve tried to work on it over the years and produce it, with me in the lead, but it sat there, I guess till it was the right time to make it.

You are working across multiple mediums as an actor, producer, writer, creator – from the stage to film. How do you navigate wearing multiple hats?

DS:  Well, the easiest thing to say is I just do the next indicated thing.  Even though it seems like multi-tasking, I know that I can only focus on one job at a time.  It’s kind of like cooking a big meal.  You do the thing that’s going to take the most time first, get that going, do the thing that takes the next large amount of work, and then work down, so it all gets to the table at the same time ready to eat.

DS:  The community keeps me sane, keeps me grounded, helps keep me encouraged to continue.  Sometimes it’s the most peaceful four hours of my week [the meeting time of the scene study class].  Also, I learn so much still from watching other people work and their struggles and wins.  This is a hard business in a town that can eat you alive.  These people are my nurturing place.

DS:  I LOVE it!  I didn’t know how much I loved actors till I started teaching them.  I always wanted to teach at this level.  Back when I’d watch Milton or Richard, I knew I wanted to have that much experience someday, when I could bring out the “thing” in people.  The magic, whatever you call it.  It’s an honor to help anyone they way I was guided.  There’s something really exhausting and humbling and ecstatic in it all at the same time.

DS:  Study with a teacher that wants nothing but your best.  Absorb everything: movies, operas, theater, museums, the world, music, the news – store it all up.  Never give up, you actually get better the older you get.